The WCCC 2020 organizing team had an extensive meeting during the weekend and we concluded that the WCCC 2020 should be canceled. We informed the Presidium and all members agreed with our decision.

Our main concern is that nobody can really predict what the situation will be with regard to the COVID-19 in October both in Greece and worldwide. We prefer not to take the risk.

At the moment in Greece even if the lockdown is not so strict as it used to be in the previous three months when practically no activity was possible, the general situation is far from normal. Flights are not allowed yet from many airports, the authorities change restrictions constantly as soon as new instances are detected, the information re. the quarantine that the travelling tourists should undergo varies from country to country and so on. Four months before the congress and we cannot even travel to Rhodes to meet with the hotel management to agree on the necessary arrangements. Too much time has been wasted and there is no sign that we can recover it comfortably.

Of course, we are willing to host the event at the same place in October 2021. We shall keep you updated. 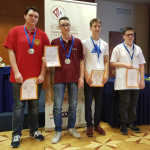 The Youth Chess Composing Challenge (YCCC) is an individual international competition first introduced by the Serbian Chess Problem Society in 2016. Since 2018, the YCCC has become a joint project of the newly established Youth Committee of the World Federation for Chess Composition (WFCC), and a part of regular program of the yearly WFCC Meetings.

YCCC competitions are presented in the /Competitions/Composing section. 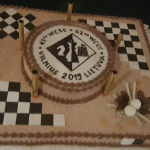 By Ryszard Królikowski, the 43rd WCSC director: “The 43rd  WCSC competition brought a tensed and exciting fight for the highest places. Finally, Piotr Górski (POL) won, having the most consistent results during all six rounds. Besides, he fulfilled the 4th GM norm and obtained the desired title. He is the first World Champion without an international title in OTB chess, after many years (Caillaud 2000, Selivanov 2003) …”   →more

26 member countries were present. United Arab Emirates was welcomed as a new member country of the Federation. Neal Turner was appointed as the new secretary.

WCCT: The themes of the 11th WCCT were selected. Countries are urged to inform the spokesman Georgy Evseev, 10wcct@gmail.com (same email address as in the previous tournament) and the director of the tournament Mikalai Sihnevich, n_signevich@tut.by about the sections they are willing to judge. The deadline is 1 November 2019. It is hoped that the WCCT can be announced by the end of the year.  →more…

The organizers of 62nd WCCC & 43rd WCSC remind you that you should make your reservation until 1st of June!

See the Invitation announced on the 5th of February, 2019.

The age limit for participants is extended to U23 – for all young composers born 1996 and later. Another important change is introduction of one easier theme in all three genres (black self-block), aimed to attract the youngest generations and newcomers. Two other themes should inspire more experienced participants.

The Lithuania Chess Composers’ Society would like to invite all delegates of the World Federation for Chess Composition (WFCC), chess solvers and chess composers, all those who are interested in chess problems and accompanying persons to attend the 62nd World Congress of Chess Composition (WCCC) and 43rd World Chess Solving Championship (WCSC).

The congress and the championship will be held in the hotel Crowne Plaza Vilnius  (Vilnius, capital of Lithuania) from Saturday, 17 August 2019 (arrival), to Saturday, 24 August 2019 (departure), with the WCSC on Tuesday and Wednesday (20 and 21 August 2019).

The first version of the WCCC 2018 bulletin is assembled from the received and collected resources. It contains results of all competitions, and includes auto-generated table of contents and bookmarks, for easy navigation.

Update is planned at least for December, when, after the 3-month objection period, preliminary awards of pre-congress tourneys will be replaced by final ones. – Ivan Denkovski