“The Study of the Year“award is organized by the WFCC and aims at introducing to the general public a single friendly endgame study that would hopefully appeal to chess players of various levels and encourage them to pay a deeper attention to the art of the endgame study on a more regular basis. Composers were invited to pick up just one study (either their own or by others), published (informal tourneys) or judged (formal tourneys) during the year 2012. All 24 candidates were sent by the world’s best composers and the jury’s scores may be seen here: http://akobiachess.gol.ge/study_2012.html

An international panel of world famous experts (David Gurgenidze, Oleg Pervakov, Gady Costeff, Ilham Aliev and Harold van der Heijden) examined the candidates and announced The Study of the Year 2012 at the end of 2013.

See the PGN file here. On the new page, you can click on the moves and watch the pieces moving. 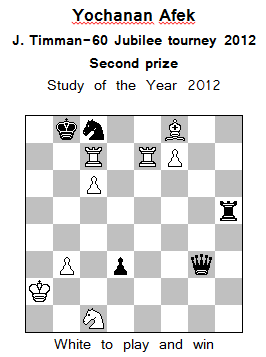