John Rice, the new President of the Permanent Commission
of the FIDE for Chess Compositions 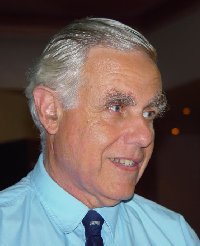 John
Rice was born in 1937 and has been composing chess problems for 50 years.
From the mid-1950s, he was one of a group of young English composers (including
Barnes and Lipton, also born in 1937) who developed modern ideas in two-movers.
John is still fond of the half-battery!

Subsequently he broadened his scope and
for many years has composed successfully in most genres. Around the 1960s
he conducted the problem column in the British Chess Magazine, and since 1999
has been editor of The Problemist. For many years he was the director of The
Lloyds Bank British Chess Problem Solving Championship. He was President of
the British Chess Problem Society in the 1980s and has been a delegate at
the PCCC since 1994. He became an International Master in 1969 and an International
Judge in1972. So he has had a varied chess problem life and will surely face
up successfully to the challenge of being PCCC President for the next four
years.

John taught French and German at a London
school, eventually becoming deputy head master. He and his wife Ann, a classics
teacher, have two grown-up sons. John is a great lover of classical music
and in conversation is always ready with a clever or witty remark.